Talk With Your Fork While Eating Noodles 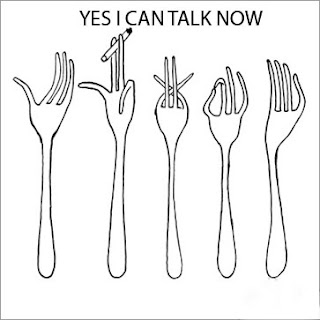 "The sounds are apparently generated by the resistance value of the food as it is bitten off the fork ?? the noise it produces as she eats a chicken nugget sounds remarkably similar to a chicken clucking.When the young lady on film tucks in to a piece of tempura the fork proclaims 'Garigori' and 'shori' while a stick of cheese produces the word 'Paku'. Apparently longer pieces of food will cause the fork to produce multiple sounds and words while they are eaten," the Daily Mail reported.

The fork has the ability to distinguish between different types of eating.

With this invention, the developers aim to encourage people to try different types of food and thus a more varied diet. They want the fork to be used as a communication tool for couples, the report added.


The fork will have a great future as we are alone most of the time and need someone to talk with us at that time. Lets see how usefull it will be and by when can we have such forks.