Is Facebook becoming boring for people?? The answer may be Yes or No or may be...

But the figures shows that its becoming boring now a days.Britain lost 600,000 users in the month of December.

The UK saw the biggest loss of any major territory, the figures from monitoring firm SocialBakers show.
Experts today said confusion over the firm's privacy policies and 'Facebook fatigue' from having too many friends could be behind the fall - although Facebook has disputed the figures. 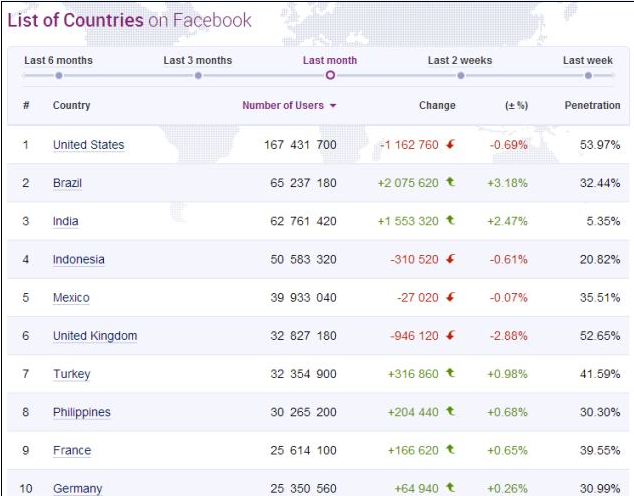 It claims the data is designed for advertising, and does not accurately show the real number of users.
'Some of these reports use data extracted from our advertising tool, which provides broad estimates on the reach of Facebook ads and isn't designed to be a source for tracking the overall growth of Facebook.
'We are very pleased with our growth and with the way people are engaged with Facebook – more than 50% of our active users log on to Facebook in any given day.'
According to SocialBakers' index, the UK ranks as the world's sixth most active Facebook user base, with more than 33 million unique users in December, although the firm says that figure duplicates users who access from multiple devices.
The US tops the list with more than 169 million unique users per month, followed by Brazil with 65 million and India with 63 million.
The UK's user base would be equivalent to 53% market penetration last month, second only to the US with 54%.
Experts say the problem could be due to 'Facebook fatigue'.
'I think a lot of the privacy issues have dogged them, and that has put people off,' said Stuart Miles of website Pocket Lint.
'It's just got confusing as Facebook gets bigger and bigger, and a lot of people are also fed up of adverts in their stream.
'A lot of UK people are a lot more worried, and only want to talk to their friends. People friended everyone when they signed up, and now they regret that.'

Mr Miles said the firm needs to reinvent itself to attract people back.
'It's about relevancy - they need to become relevant and useful again.
Recent data from comScore shows Facebook's UK monthly active users plateauing at just over 31 million between September and November, falling to 31,456,000 at the end of the three-month period.
The firm is also set to make a major announcement tomorrow some believe could be a mobile phone.
The firm has sent out invites to US journalists for a special event at their usually secretive Silicon Valley HQ.
The invites promise to allow attendees to 'see what we're building' - with online rumours pointing to a phone.
However, others claim it could revolve around new mobile phone software rather than a handset. So it is clear that Facebook has reached a optimum level of users now and its becoming boring now a days. It makes the future of facebook in danger.