ecoATM: Get Money For Your Old Phones and Mp3 Players

It was amazing to see that ATM machines can now give money for your old and waste products such as phones and mp3 player etc, so no need to throw your old electronic items, just go to ecoATM and throw your item there and it gives you money for that.....Isn't it great. 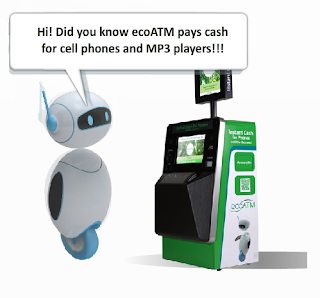 The recycling ATM from Californian company ecoATM can evaluate unwanted goods for resale and recycling...

Looking to sell your old mobile phone? With a recycling ATM that provides you with the option to exchange in your discarded mobile phones for cash, you need not look any further now!

Californian company ecoATM has come up with a machine (rather an 'Intelligent ATM Machine') which aims to inspire people to go green. The machine is sophisticated enough to take in an old cell phone and pay out the agreed price that too on the spot. What else could you have asked for?
Mark Bowles,co-founder, ecoATM told the Daily Mail: "The basic technologies of machine vision, artificial intelligence, and robotics that we use have existed for many years, but none have been applied to the particular problem of consumer recycling."

"But we've done much more than just apply existing technology to an old problem - we developed significant innovations for each of those basic elements to make the system commercially viable," Bowles added.

While three-fourths of the mobile phones collected are resold, the remaining ones are sent to recycling channels to reclaim any rare earth elements and keep toxic components from landfills.

ecoATM uses artificial intelligence (AI) in order to differentiate varied consumer electronics products and determine a market value. Once you accept the value, you can either receive cash or store credit for your trade. There is also an option for donating all or part of the compensation to one of several charities.

It is expected that more than 300 kiosks would be rolled out across the US by December-end.

The device has been developed with support from the US National Science Foundation (NSF).

Can I get my device back?

You can get your device back at anytime during the process up until you explicitly confirm the final sale and price. Your device will not be harmed in the process nor will any personal data on the device be accessed.

So if you all need this ecoATM to be established in your country, just comment below and the company will look after it. Lets hope that it would be established soon in every country.
6 comments:

Android Phones are better than iPhone

i Phones getting popular in the world,but what we find is Android Phones are better than iPhones, its a personal belief upon some statistics shown below.


Despite a lot of effort, Android phones will continue to dominate. No, it is not our love for open source that makes us say that... Android really has come edgy technology that makes it beat the iPhone 5 pretty easily. 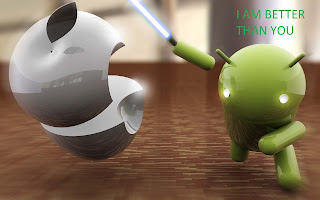 Apple has certainly put in a lot of efforts to make iPhone 5 a cutting-edge device, but the company has failed to add that 'wow' factor. Despite a lot of effort, Android phones will continue to dominate. No, it is not our love for open source that makes us say that... Android really has come edgy technology that makes it beat the iPhone 5 pretty easily. Here are the reasons why Apple's latest will be far behind the existing Android devices:

For the first time Apple recognised the importance of larger screens in smartphones and came up with a 10.2-cm (4-inch) display. BUT, Android has always a master when it comes to screen sizes. Android's Droid RAZR M, which sports a 10.9-cm (4.3-inch) display is considered a compact device. iPhone 5's biggest competition Samsung Galaxy SIII comes with a 12.2-cm (4.8-inch) display while the Galaxy Note II comes with a whopping 14-cm (5.5-inch) display.

For someone who wants a large screen phone for making the experience of watching videos better and for easier reading of text, Android phones are a better option any day.

If you are the owner of iPhone 5, forget about leveraging the mobile payment systems which allow the user to touch their device with a reader to carry out a transaction. Apple plans to bring NFC support on the iPhone 6 in 2013. Whereas, Android scores in this department as well . The latest Android devices are NFC-enabled. The can not only carry out monetary transactions but can also share videos, photos, contacts and much more just by tapping the backs of two devices together. Android brought NFC sharing software, Android Beam, with its last version Android 4.0 aka Ice Cream Sandwich.

iPhone users have finally got an extra row of icons with iPhone 5, which were absent in iPhone 4 and 4S. Users can now see their TweetDeck icon on the home screen and tap it without scrolling over. But this is something where Apple has taken to arrive. Its a usual thing for an Android user. An Android users gets more than just a fixed set of application icons on his home screen. Android users are given a working desktop where they can fill with interactive widgets.

For Android, micro USB is a standard. Infact, European Union has instructed the phone manufacturers to incorporate micro USB for charging as it reduces waste because the users may have their old cables. But, iPhone 5 doesn't have the provision for micro USB and the users have to resort to a proprietary connector, called 'Lightning'. Apple has included it probably because it can make money by selling proprietary wires and make iPhone 4S owners upgrade their accessories if they are buying the new iPhone.

iPhone 5 users can use any stock iOS 6 keyboard. But, Android users have an advantage. If they do not like Google's default layout, they are free to go for a a third-party keyboard. Some of the finest third-party keyboards that Android offers include Swype, which enables the users to create words by tracing between letters on the keyboard, and SwiftKey, which predicts the next word in your sentence to save you keystrokes. Heck, you can even buy an Android slider like the Motorola Droid 4, which has a real physical keyboard.

Attach any files you want to your email

Apple is a bit protective about using immature technologies. Probably that's the reason why the company has not incorporated 'email attachments' feature on iPhone 5. However, the new iOS 6 mail is better than the previous versions. The previous versions did not offer any attachment options in its message composer in the iOS mail, the new iOS 6 mail, that comes with iPhone 5, gives the users the option of attaching images or video only.

Whereas, Android offers an entirely different experience. If you have to send a document to your boss urgently while you are out of office, just use an app that opens that kind of file. Go to that app and you can easily send the file from there. Android allows the users to attach the files they want to send with any email message.

So these are the facts that makes Android better than iPhone 5. But its totally dependent on your need that what kind of features you require.
iPhone is also best at its place but Android phones play a vital role in giving all the features required by a general man, its cost savvy and so its better.
3 comments: